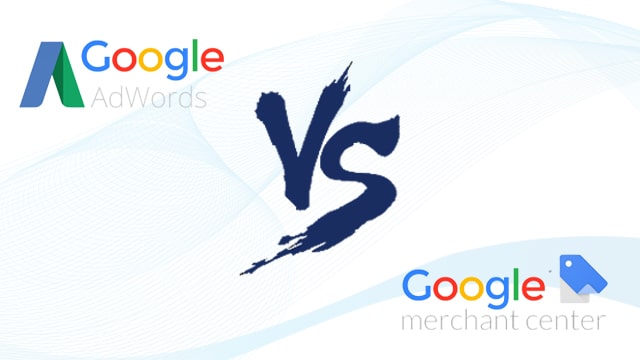 What Is The Difference Between Google Adwords And Merchant Center?

In the world of paid search, as we call it in the digital media industry, is one that is constantly evolving. Amongst the first of them is from our good friends at Google. Most people believe that Google was the one who started the paid search also referred to as “PPC” concept off. The first company to coin the term “PPC” was “Planet Oasis” who did so with a desktop application. The first version of PPC being displayed was done so by a company called “Open Text”. They sold clicks in search results using the phrase “Preferred Listings”.

The cheapest cost in 1997 for a PPC ad was a mere $0.005 US Cents per click! That today is just not heard of, no matter who it is selling this concept. It wasn’t until the turn of the century that Google launched its popular Google Adwords advertising platform. They put a twist into Adwords though which gave them an edge over their competitors. They introduced a flat “CPM” bidding model. This meant that advertisers would end up paying each time their ad was displayed on a users screen.

Needless to say that Google was seen as one of the most innovative companies when it came to this new marketing technique. There were many things they did first, one of which included a syndication platform for their advertisers called “Adsense”. It was a game-changer for them as they opened up a bigger marketplace that no one else had done in the past, well at a search engine level anyway. The Adsense platform enabled website owners to publish ads on their websites. This came in one of two formats which included a simple text styled ad and the second was an image banner in one of many different sizes.

So What Is Adwords Exactly?

Adwords as most people know it is one of the many PPC (Pay Per Click) platforms in the marketplace. It has enabled advertisers to generation untold billions in sales globally since its conception. Originally they were the ads that appeared across the top, down the right-hand side and across the bottom of a search results page. Since it first started there have been massive changes to the way the ads are perceived by users. Due to the excessive use of ads being placed on the right-hand side of the screen has actually become a blind spot. This pushed Google to rethink the places where the ads would be presented. The end result was the ads would only be presented in the first 3-4 spots at the top of the search results. A further 3-4 at the bottom of the page.

Adwords ended up getting a few additional features integrated into it. This included what is referred to as Google Adsense and not long later the Display Network. The Adsense platform and the Display Network did offer a cheaper way for ads to be published for advertisers. Advertisers got some incentives to add their ads to be published in these new networks. The biggest incentive was lower CPC (Cost Per Click) rates.

How is Adwords Managed

Adwords is managed through the Google Adwords Dashboard. The Adwords Dashboard is constantly growing and being optimized by Google to enable advertisers to get better results. It will also enable advertisers to more accurately track results and find more customers. To help advertisers or people who don’t have access to professionals skilled in Adwords there are many tools available for you to use. To get the best results though you should engage an Adwords Professional.

What Is The Google Merchant Centre?

Google Merchant Centre is another advertising platform but this one is specifically aimed at shopping. Google sees it as a tool that enables you to upload your store, branding and product information. These products then can be made available through shopping ads and other Google services. The tool also allows you to reach more consumers as they actively shop on Google, YouTube etc.

Understanding the Google Merchant Centre is a tool rather than a platform stands to reason why it is valuable to business owners trying to move more product. The reason for this is once you have all of your product data in a central system like Google Merchant Centre. You can now get platforms like Google Adwords to promote your products to users from around the globe running the Google Display Network on their website.

How Can I Take Advantage Of Google Merchant Centre

The first step is finding an agency capable of handling such a task. There is a lot around that claim that they can set up a Merchant Centre account and they are probably correct to a small degree. In all reality,y though it will only be at a basic level that they can do such a thing. To get the best results though you should engage the services of an agency that has Google Adwords Professionals. If you cannot find an agency that suits, try finding an independent Google Adwords Professional. They may be a little cheaper if they are starting out. Typically though a good one will be quite expensive.

Keep in mind that shopping ads are still cheaper than running Adwords but you should always consider running both simultaneously. Officially there is no direct correlation to cost reduction for ads and rankings or even product rankings in the shopping tab. There have been way too many instances for marketers around the globe showing good results after doing both.

Need Help With Your Project?

We are certified and experienced in Google Shopping, Google Ads, and Google Analytics.